What is Play Ball?

PLAY BALL! was the first baseball motion picture with sound ever made.  It was filmed in Detroit during the 1934 Tiger season, when baseball mania was sweeping through the City.  It was written and directed by George Moriarty and premiered at the Book-Cadillac Hotel (Detroit) on January 9th 1935.  It was viewed by 2 million people in 1935 before fading into obscurity.

How come no one has ever heard of it?

Before the age of VHS and DVD, movies would experience a limited run at theatres and then be filed into the archives of the production companies.  Sometimes a movie such as Wizard of Oz would be such a smash hit that it would be shown again in theatres several years later and then eventually on television before being preserved and re-released on VHS/DVD.

Other movies such as PLAY BALL! would be forgotten about and sit in the archives for decades.

How was PLAY BALL! discovered?

During the research phase for Detroit City of Champions "The Players," frequent references were made in the newspapers about a film crew appearing at Tiger practices and games during the 1934 season.  Production of the movie took place following the season and on January 10th 1935, newspaper articles from several different Detroit writers appeared which discussed a film premier of the movie at the Book-Cadillac Hotel the previous night (1/9/35).

The writers all mention the fact that two versions of the movie were shown.  One was 32 minutes long, the other was 55 minutes.  The 32 minute version is the one that was discovered after an extensive search through various archives and private collections.

Only one original master of the movie is known to exist.  It was carefully transferred onto DVD and then restored in an effort to present it in its' original grandeur.

Research is ongoing into the discovery of the full 55 minute version of PLAY BALL! which according to the newspaper writers, featured extensive commentary by director George Moriarty.

What is the Movie about?

The best way to describe PLAY BALL! is that it is a real-life "Field of Dreams."  In that famous baseball movie, actors emerge from the corn field who portray famous ballplayers from the 1910's-1920's such as "Shoeless" Joe Jackson.  In PLAY BALL! virtually every American League star-emerges from the darkness of the past to explain the history of baseball and how to play the game.

The role call of these legends reads like a who's who of the greatest players the game has ever known: Babe Ruth, Lou Gehrig, Charlie Gehringer, Hank Greenberg, Jimmy Foxx, Lefty Grove, Lefty Gomez, Schoolboy Rowe, Tommy Bridges, Red Ruffing Connie Mack, and many more, including all of the 1934-1935 Tigers who are introduced in a 10 minute bonus video (in addition to the 32 minute movie) called "Those Tigers."

The movie is narrated by Ted Husing, whose voice is synonymous with nearly every major newsreel from the 1930's.

Who is George Moriarty?

Quite simply, George Moriarty is one of the greatest legends in baseball history and the story of his career has been as forgotten as the movie he directed.  He was the Tigers' starting third basemen during their 1909 pennant winning season and then became their field captain despite the presence of Ty Cobb.  Moriarty was one of the most ferocious brawlers in early baseball history and once fought four members of the Chicago White Sox to a draw.  He became manager of the Tigers from 1926-27 and then became one of the greatest umpires in the American League.

As an umpire in the 1935 World Series, he ejected 4 Cubs players for their merciless taunting of Hank Greenberg's Jewish ethnicity.  He also wrote and directed PLAY BALL! which perhaps was the greatest achievement of his career.

Though it is a bold claim to make, Moriarty's film can easily be mentioned as one of the greatest baseball movies ever made.  It is a cinematic marvel, incredibly well written, and like all other great movies, it is timeless.

A "Special Section" on George Moriarty's career begins on page 256 of "The Players" Volume I; while the film reviews from the Detroit writers who were present at the Book-Cadillac on the night of the PLAY BALL! film premiere follows on page 263.

Recommend this page on: 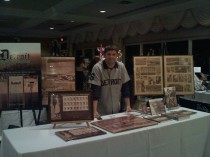